15 augustus 2014
Last week young people from three European countries joined forces in The Netherlands at the first Future for Life international summercamp. Their mission: develop advertising posters about issues they consider important to be discussed in the European Union.

Eight boys and girls form Turkey, eight boys and girls form Greece and eight alumni from IMC Weekendschool teamed up for this very special assignment. For seven consecutive days they worked in international teams, helping each other to come up with the most important issues. The issues they think the European Parliament should address. The Ausbuilders were in charge of the program with support from various vounteers. Participants were inspired by several professionals in the field of advertising & publicity, photography and design. Below the poster from Sahim and Thomas.

Sahim: ‘I think I will have children some day. I don’t want my children to be born in a world full of problems. We have to end pollution, war, hunger and all the other problems and crises in the world so they can have a great future.’

Thomas: ‘Many countries want to conquer other countries. Like Russia and Ukraine; Israel and Gaza, ISIS in Iraq. But also the Muslims in China who have a lot of problems. We have to be more considerate with other people.’

Results can be found on: http://www.ay-europe.com/ We do hope the European Union will follow up on these issues young people are confronted with daily. This Future for Life international project was made possible by the European Union via their Youth in Action program. 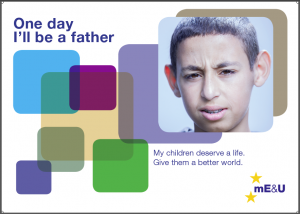 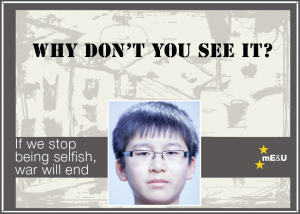